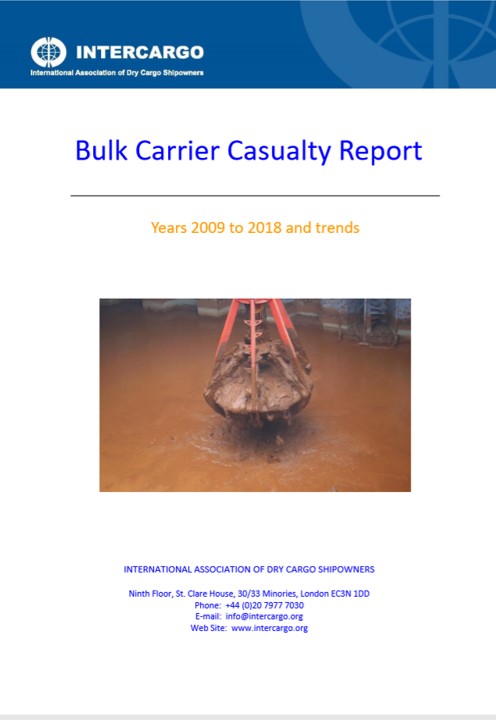 Although there has been no reported loss of bulk carrier over 10,000 dwt in 2018, INTERCARGO urges all stakeholders to remain vigilant as cargo liquefaction continues to pose a major threat to the life of seafarers.

This edition of the Bulk Carrier Casualty Report covers reported bulk carrier casualties from 2009 to 2018 and provides an analysis on statistics and trends over the last 10 years.  Forty eight (48) bulk carriers over 10,000 dwt have been identified as total losses over this 10 year period. Cargo failure and liquefaction, continue to be a major concern for dry bulk shipping. There were 9 casualties of suspected cargo failure among the 48, consisted of 6 bulk carriers carrying nickel ore from Indonesia, 2 vessels with laterite (clay) iron ore from India and 1 with bauxite from Malaysia, and there were 101 lives lost associated with those 9 casualties against a total of 188 lives for all the 48 casualties.

Ship operators need to be especially cautious when loading during a wet season, as currently being experienced in certain parts of South East Asia, however it is paramount that the shippers and the local authorities fulfil their obligations as required by the IMSBC Code.

Lessons learnt from past incidents play an important role in determining where additional safety improvement is necessary. The importance of flag States’ timely submission of casualty investigation reports to IMO should be stressed, as a means for identifying the cause of incidents and enabling corrective actions to be taken. The IMO GISIS database showed by end January 2019 that 23 investigation reports of 48 losses had not been submitted to IMO by their flag States. Some details further highlight the issue of slow reporting:

The highest loss of life has been attributed to cargo failure (liquefaction), totalling 101 lives lost from the 9 casualties. Two (2) investigation reports of those 9 cases have not been submitted to IMO.

The most common reported cause of ship losses has been grounding, totalling 19 losses among the 48 cases. Six (6) investigation reports of those 19 cases have not been submitted to IMO.

Six (6) ships lost with unknown causes claimed 61 lives. Five (5) investigation reports of those 6 cases have not been submitted to IMO.

Reported flooding led to losses of 6 ships. No investigation report of those 6 cases has been submitted to IMO.

INTERCARGO stresses the importance of timely submission of the casualty investigation reports to IMO from relevant flag States, as a means of identifying the causes of the incidents and enabling corrective actions.

SELECTED HEADLINES ON ALTERNATIVE FUELS & TECHNOLOGIES  BY INTERCARGO- July 2022 Methanol Methanol moves up the agenda from low base in alternative fuel choices Monthly figures show slow-down LNG-fuelling uptake, although more orders are on the...

INTERCARGO is a supporting organisation of “The Nautical Institute Singapore Conference 2022” that will take place Thursday 1st September, 08:30 am – 06:00 pm (SGT) at Temasek Boulevard, Suntec City, Singapore. The conference will...

The eighth session of the Sub-Committee on IMO Sub-Committee on Implementation of IMO Instruments (III 8) was held remotely from 25 to 29 July 2022. The INTERCARGO brief as attached covers the following items of this meeting: You need to login to...

Update on 28 Jul 2022: Allianz published its Global Claims Review 2022 recently (link), highlighting the following findings: Cyber insurance claims have increased significantly in recent years, driven by the rise of threats such as ransomware...

Update on 26 Jul 2022: On 23 Jul 2022, WHO announced that the multi-country outbreak of monkeypox constitutes a Public Health Emergency of International Concern (link). It further said: WHO’s assessment is that the risk of monkeypox is moderate...

Panama Canal and Its Tolls Structure

Update on 19 Jul 2022:- The Panama Canal Authority issued an Advisory to Shipping No. A-25-2022 dated 15 Jul 2022 as attached, informing that the Panama´s Cabinet Council has Approved the Toll Structure. One element is relevant to bulk carriers:...

The 8th session of the IMO Sub-Committee on Implementation of IMO Instruments  (III 8) will be held remotely from 25 to 29 July 2022. The INTERCARGO pre-brief as attached covers the following items of this meeting: We will attend III 8 and report...

DryBMS – a quality standard for the dry bulk sector

-first posted on 26 Jan 2021- INTERCARGO and RightShip are founding partners of DryBMS, a quality standard for the dry bulk sector. Safety, environmental  and operational excellence are promoted through company self-assessment. Both RightShip and...