Impact of the upgraded Panama Canal on bulk carrier sector

Members may have read the press release of Panama Canal summarising its performance of the Fiscal Year 2017 (FY2017) (https://www.ajot.com/news/panama-canal-sets-record-annual-cargo-tonnage-in-fiscal-year-2017). It led us to do a general research with following findings to share with members.

In terms of transit of tonnage, bulk carriers played a remarkable role in the past transiting through the old locks (https://www.lamar.edu/engineering/research/center-for-advances-in-port-management/_files/documents/Jorge%20Quijano%20Presentation.pdf): 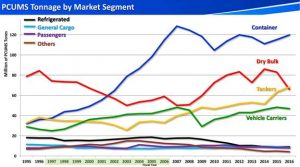 Grains, the leading commodity group transported in bulk carriers through the Panama Canal, account for 45-60% of total cargo in some years, which consists of soybeans, sorghum and corn from the United States ports in the Gulf of Mexico to Northern Asia, especially China, Japan and South Korea. It seems that similar cargo from Brazil and Argentina would less use the Panama Canal for the shipment. Therefore increase of grain export from Brazil and Argentina is expected to reduce the export of the same from the US , therefore less transit of the Panama Canal would be.

In the meantime, another factor affecting the transit level of Panama Canal is because of lower fuel cost, which encourages the increase of Panamax vessels with grains through the Cape of Good Hope.

In addition to grain, other cargoes transiting the Canal include salt from Chile to the East Coast of North America, iron and steel products to the US from China and South Korea, coal and coke cargoes from the Pacific Coast of Canada to Europe and from the Atlantic coast of Colombia to Chile.

You need to login to view the rest of the content. Please Login. Not a Member? Join Us

You need to login to view the rest of the content. Please Login. Not a Member? Join Us

Theft, Robbery and Piracy Incidents at Sea in Asia

Update on 10 Sept 2021: A mid-year report (Jan-Jun 2021) of the maritime security situation issued by the Information Fusion Centre (IFC) of the Singapore military highlighted that: Slow-moving vessels with low freeboard (bulk carriers etc) were the...

Dear Full Members of INTERCARGO,
You need to login to view the rest of the content. Please Login. Not a Member? Join Us

Update on 05 Aug 2021: The Database on Ship-Terminal Interface Issues contains entries of 672 ports in more than 100 regions/countries. In addition to the information about port reception facility issues, there is also feedback from bulk carriers...

The 7th session of the IMO Sub-Committee on Implementation of IMO Instruments (III 7), originally scheduled to be held from 20 to 24 July 2020, was postponed due to the COVID-19 pandemic and eventually held remotely from 12 to 16 July 2021. Here are...